Diabetes mellitus is one of the leading causes of blindness in the U.S. Diabetes can affect the retina (retinopathy) which can result in visual loss. Most forms of diabetic retinopathy can be very successfully recognized and treated if caught in a timely manner. Routine monitoring of diabetics by an ophthalmologist is essential for detection of these problems.

Read this important information before proceeding further:
These sections are not intended to replace the professional examination and diagnosis of a physician, and they are presented here purely for informational purposes. All possible diagnoses and treatment options are not covered, and the information discussed should not be taken as a recommendation to self-diagnose and self-treat a condition. A misdiagnosed or improperly treated eye condition can result in a permanent loss of vision, or a permanent loss of function of the eye or visual system. In the case of any eye problem, seek medical attention promptly. This can include emergency room treatment, as well as treatment by a medical physician or eyecare provider.

RETINAL COMPLICATIONS OF DIABETES
Diabetes Mellitus initially results in high blood sugar but ultimately affects the blood vessels in various organs of the body. In a way, diabetes is really a vascular disease and can affect vascular organs such as the kidneys, heart, brain and eyes. In the eye diabetes mainly acts upon the retina which is the tissue that carries visual sensory information to the brain. Diabetes can also cause the proliferation of abnormal vessels which can bleed and leak in the retina. When bleeding and leaking occurs in the central part of the retina, the macula, it can result in vision loss.

Fortunately, the eye is unique in that living blood vessels in the retina can be observed and treated through the cornea (the “window” of the eye). This makes detection and treatment of the disease much easier than other organ systems.

Type 1 diabetics tend to be younger at onset, and require insulin for survival. Type 2 diabetics are usually older at onset, and the disease can often be controlled by pills or diet. The longer that the disease has been present, the more risk in developing retinal problems. It is often said that after 15 years of diabetes there is an 80% risk of retinopathy, with 25% having more severe retinal disease.

Background Diabetic Retinopathy (BDR)
This is the earliest phase of retinopathy and is caused by small scattered hemorrhages in the retina. Irregularity of blood vessels, mild leakage from the vessels and small microaneurysms can occur. Leakage from the vessels can accumulate in the central portion of the retina (macula) and cause macular edema with consequent vision loss.

BDR is usually mild and does not cause visual loss. However, it is an important indication that diabetes is affecting the retina and suggests that more frequent examinations may be necessary. 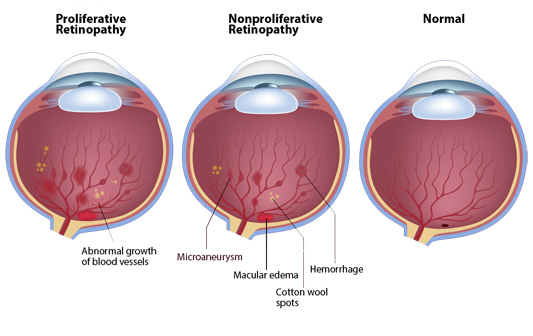 Diabetic Macular Edema
Swelling of the retina secondary to vascular leakage is called “edema”. The retina literally becomes soggy and overloaded with the fluid that is seeping out of the damaged vessels. When edema occurs in the macula it can cause vision loss. Various diagnostic tests such as fluorescein angiograms and OCT scanning are useful in determining the extent and location of the edema. Diabetic Macular Edema is often treatable with laser or by injections of steroids or other substances into the eye.

Proliferative Diabetic Retinopathy (PDR)
A more severe retinal complication of diabetic eye disease is “proliferative diabetic retinopathy”. PDR is much more uncommon than BDR but usually causes more complications and more severe visual loss. PDR is caused by a proliferation of very small but abnormal vessels that can break through the retina and start bleeding. The blood can cause damage or scarring to the retina. Ultimately, the blood can also break into the gel of the eye causing large vitreous hemorrhages and blocking vision. PDR usually requires laser treatments or even intraocular surgery in the operating room. In some cases, the vision can not be recovered.

Evaluation and Treatment of Diabetic Eye Disease
The diagnosis of diabetic eye disease requires routine dilated eye examinations at regular intervals of 6-12 months. If there are retinal changes present, follow-up examinations may be more frequent. Various diagnostic tests are available to help evaluate the extent of the disease process.

Flourescein Angiogram
A fluorescein angiogram is a test done in the office where a dye is injected into the eye and photographed a few minutes later as it passes through the retina. The angiogram can yield important information regarding bleeding and leaking of retinal vessels, as well as the location of edema and abnormal vessels.

Optical Coherence Tomography (OCT)
OCT is a powerful diagnostic technology because it enables visualization of the cross sectional structure of the retina and anterior eye with higher resolutions than any other non-invasive imaging modality. Furthermore, OCT image information can be quantitatively analyzed, enabling objective assessment of features such as macular edema or retinal nerve fiber layer thickness. OCT enables earlier and more sensitive detection of disease as well as improved monitoring of disease progression and response to therapy

Treatment of diabetic retinal disease
Laser treatment: Many diabetic retinal problems are treated using a laser. The laser fires tiny spots of energy onto the retina in order to seal leaking blood vessels or to destroy rapidly proliferating blood vessels. Laser treatment is done in the office and is relatively painless. The treatments take 10-20 minutes and may have to be repeated several times. The laser may be used to treat a localized area of focal bleeding or leakage, or be used throughout the entire retina as needed. The laser spots can be thought of as “welding” spots that seal the retina and decrease leakage of fluid from spreading throughout the tissues.

Vitrectomy: In cases where blood has penetrated the interior gel of the eye, or where vitreous traction is threatening the retina, vitrectomy is used to remove the vitreous, blood or membranes that threaten the retina. This procedure is performed in an operating room and often includes laser done at the same time.

Transient complications of elevated blood sugar:
When the blood sugar level in diabetes becomes very elevated it can cause the human lens to swell with fluid. This often causes a shift in the glasses prescription which can manifest itself very rapidly. In the vast majority of cases the condition will resolve spontaneously and the prescription will return to its normal level. The process may take several weeks and often neccessitates the temporary use of several different pairs of glasses.

Glaucoma
Diabetes may increase the likelihood of developing glaucoma, a disease where increased pressure in the eye damages the optic nerve. A more severe form of glaucoma can occur also, called “neovascular glaucoma”. Here, abnormal blood vessels begin to grow on the iris near the front of the eye. This can occur with proliferative diabetic retinopathy. Unless this condition is treated early on with laser it can cause very high pressures and permanent damage to the optic nerve and to the vision.

Prevention of Diabetic Complications
Early detection of diabetic eye complications is crucial in the successful management of retinopathy. In most cases retinopathy is easily detectable and can be treated quite easily when detected at an early stage. Eye exams for diabetics should include papillary dilation and should be performed on a regular basis, usually every 6 months to one year.